According to the latest data from Skew, Bitcoin (BTC) has not seen three positive consecutive quarters since 2017. If BTC ends Q4 with a net gain, it would be three consecutive winning quarters for the first time in three years.

Q4 has been mostly bearish for Bitcoin since 2018 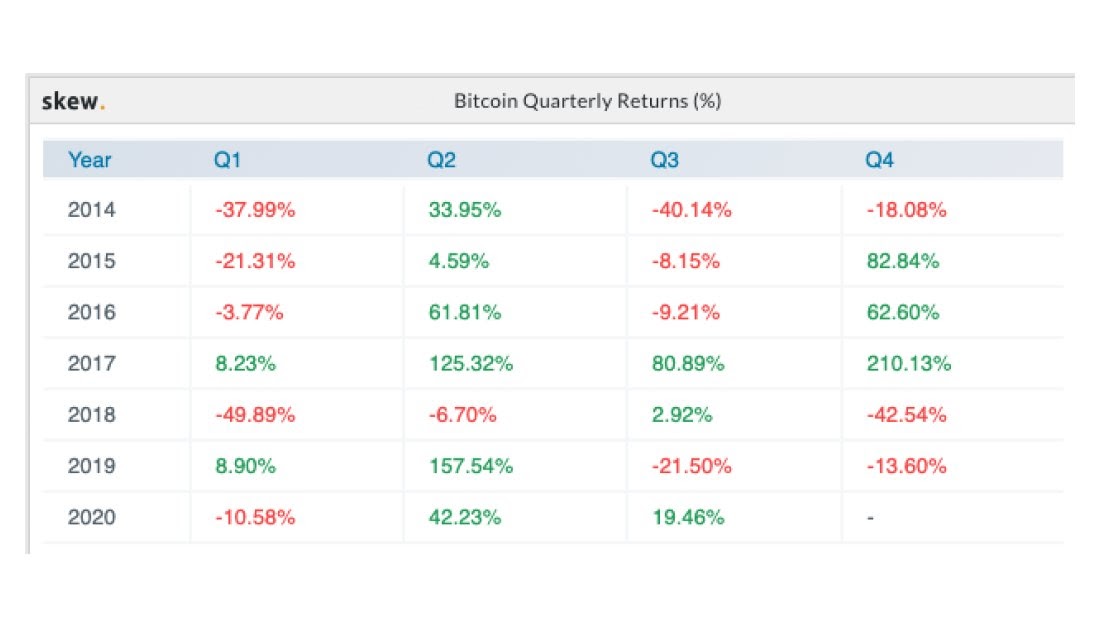 From late 2016 and up to 2018, Bitcoin saw five positive consecutive quarters to record an all-time high by the end of 2017.

Analysts attributed that historic rally to two major factors. First, BTC saw a massive mainstream frenzy across major markets including the U.S. and South Korea. Second, BTC came off a block reward halving in July 2016, a generally bullish milestone event for the network.

A block reward halving has a positive impact on the price of BTC because it has a direct effect on its newly issued supply. A halving decreases the rate at which new BTC is created by half, causing the circulating supply to drop over time.

As such, BTC tends to see big rallies after halvings. The problem is that in 2016, the post-halving rally came 15 months after the halving occurred, and some analysts have indeed drawn similarities with how the beginnings of that bull run to the current period.

The latest halving, which occurs every four years, happened in May 2020. If a similar cycle as 2016 plays out, BTC would likely see an explosive rally by the last quarter of 2021.

However, since 2018, Bitcoin has underperformed during the fourth quarter. The subpar performance could be cyclical for various reasons. Investors in the U.S. could sell BTC for clarity on year-end taxation and holders in Asia might sell ahead of the new year.

But two factors could potentially boost the bullish case for BTC by the year’s end: gold’s rally and the dollar’s weakness.

Strategists at the Swiss investment banking giant UBS expects gold to continuously rally throughout 2021. The prediction coincides with the fundamental weakness of the dollar against other reserve currencies.

What traders expect in the near term

In the near term, traders are becoming more cautious about the price trend of BTC, particularly as the U.S. dollar is starting to find some footing in the run up to the U.S. election.

Meanwhile, technical analysts are closely observing two important technical levels at $10,500 and $10,000 for the price of Bitcoin. As Cointelegraph reported, losing the $10,000 support area could lead to a major pullback. The movement of whales indicates that the $9,800 support region has weakened, which might cause a bigger correction.

Edward Morra, a cryptocurrency technical analyst, said he remains bearish until BTC closes back above $11,000. He wrote:

The reasons why I left a comfortable government job for crypto